As Italy’s shocking death toll eclipses even China’s, we see that Trump was right again: this virus is like warfare to China and we wonder what evil the #CoronaVirus will expose in Africa? Already Ramaphosa and the pro China ANC propaganda machine, including the complicit mainstream media, have you convinced that ALL South Africa’s, and indeed all Africa’s CoronaVirus infections, came from Europe? Really? Well where did Europe get the virus from? Yes, China, but shhhh that is racist. In fact “anti racist” campaigners have been blamed for the rapid mass spread of the virus in Italy FROM China, which ultimately led to many South Africans in Italy, contracting the virus and bringing it back to SA.

In Northern Italy, which has many Chinese manufacturing workers, these left wing traitors to humanity, who pose as anti racist activists, would rather you or your grandparents contracted COVID-19 and even potentially die, just as long as you don’t dare point fingers at China! It appears Ramaphosa, ANC and the leftist mainstream media are playing the same game in South Africa! Cyril gave the game away when he used the exact same phrase that all other globalist leaders used: “This virus knows no borders or nationalities” as if they had all been briefed! This is almost an admission of guilt that this catastrophic event is being used in a very subversive and evil way for political gain by the globalists, who stand to lose the most from it!

When other eastern nations banned flights from China it was fine, but as soon as Trump did, it was “Raaayycciiiss”! As the new virus was rapidly spreading in China, anyone in the West, who suggested a temporary travel ban with China was shouted down as racist. The communist Chinese government even waged a propaganda war against travel restrictions. Their agenda was that if the virus was going to wreak havoc on the sacred Chinese economy, they would make sure to mitigate those losses by letting it wreak havoc on the global economy too, thereby relatively minimising their losses, and so they resorted to a western-style “fight racism campaign” to achieve this objective! Multiple Chinese government run media outlets even published propaganda videos, of people in northern Italy hugging Chinese people, to prove they are not racist! The mayor of Florence Italy even tweeted that his constituents should “hug a Chinese” person and he was praised by both far-left organizations in Italy as well as the Chinese communist government. That same mayor is now quarantined in his own house…

China pursued a malicious policy, that if their economy was going to suffer, they wanted to make sure it was a global suffering event and everyone gets hurt, to mitigate their own losses and loss of competitiveness in global standings. Western leftists, as stupid as usual, fell for this, hook, line and sinker, and eagerly did the bidding of the totalitarian Chinese regime. Northern Italy has a particularly large number of Chinese people travelling back and forth for various manufacturing industries, and appears to have been targeted. There had already been an outbreak in Germany when a Chinese person visited an automotive manufacturing plant, spreading the infection to numerous workers, but this outbreak was contained. Despite this contagion it was still deemed racist to shut down travel with China, and soon outbreaks exploded across northern Italy. But then as we know, Genocide is never far away from the left…

Now ironically, on the same day that Italy surpassed China in total deaths, China announces NO NEW CASES of CoronaVirus! (apart from a few “imported” ones)!
Italy only has 60 Million people, China has 1.5 BILLION! Wow. Just wow!

As the entire West is shutting down with devastating economic consequences, the same media, the same politicians, the same far-left organizations are absolving themselves of sin and forgetting they fought against banning flights, but are still screaming that it is racist to even mention that the virus came from China at all! Anyone using the phrase Wuhan flu or Chinese virus is deemed a racist!

To date, all Ramaphosa, and his despotic Cabinet’s speeches were about what people in SA must do, NOTHING about what the ANC regime and its many overpaid cadre’s are doing to prepare for a potential demand for many thousands of hospital beds and deaths! Already African regimes have received millions in Aid from the West for CoronaVirus, and in fact this is what prompted Zimbabwe to declare a state of Disaster, despite not even having any declared cases!

SA-News have eyewitness accounts of a Chinese father and son coughing their lungs out, for hours at an A&E in Kimberley, in a waiting room full of HIV AIDS patients (who have no immunity). The father and son were immediately sent home to be quarantined by the doctor, when he finally got to see them! Yet not a word in mainstream press about ANY Chinese person being infected or importing the virus ANYWHERE in SA, this despite many thousands of workers travelling back and forth to SA from China, just like in Italy!

However, if one looks past the politicization and dramatisation for political gain, of the virus, we must understand that whether it was created by China or not, the COVID-19 Corona virus is here to stay. It will become part of our new normal, possibly as common as the normal flu, and most of us might get it at some time or another as the world builds up an immunity and develops a vaccine, hopefully sooner rather than later.

It is not so much the virus that is doing damage, but society’s reaction to it, and manipulation of it by certain globalist countries and parties. The unprecedented international media attention however has hyped it up into some very dramatic consequences like the plunges in stock markets and near shutdown of the global economy. There has been too much incorrect and even fake conversations on the topic of the CoronaVirus up until now. It is time to once and for all get the facts, and most of all, its time for people worldwide to make a quantum shift in their thought process about this virus. Bluntly put, most of us will get this virus in the next year or 2. This is the logical conclusion if a vaccine is not found and we don’t get inoculated. As you know the common flu has been with us since we can remember and yes some  people are dying from it, especially the elderly and those with weak immune systems and smokers.

Most people who get the COVID 19 virus will survive but the mortality rate will be higher than with people with flu. It is estimated that between 2 – 4 % of people getting the COVID 19 virus will die, once again mostly old people, those with bad immune systems and those with respiratory problems who might develop lung infection. So some people will die, just as some die with the flu. The virus will be rough for some 6 -7 % of patients. It will be like a bad flu to them and might lead to lung infection and hospitalization – and that is the danger in Africa, hospitalisation!  But they will hopefully survive the hospital and recover. For the rest of the COVID 19 patients, it will be nothing more than a stubborn cough and fever. They will be able to recuperate on their own at home with some bed rest only.

To sum up, the vulnerable people as far as COVID 19 is concerned are old people, those with bad immune systems and the  poor. The poor could be hard hit because they normally don’t eat healthy enough and don’t get enough vitamins to build up a strong immune system. This is the problem as far as our health is concerned. The other  effect this virus will have is on the worldwide economy. This is where it has gotten serious. Worldwide, countries are placing themselves under lockdown. Flights are cancelled and people are canceling vacations. This is leading to an economic downturn and the worldwide fall in stock markets, including our own. That affects our pensions and investments  because our pension funds do invest in stock markets. Countries that depend on foreign tourism like South Africa will lose income. 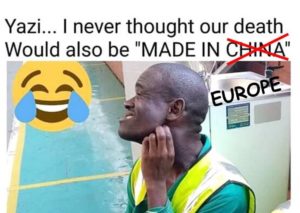 Read also: Why South Africa Should Be Banning Flights From China NOW, Like Many Other Nations Have – Non Severe Cases ARE Infectious!